invited at a Porsche dealer presentation in Drogenbos PORSCHE (link, enlace, lien)
On Thursday we have been invited at a Porsche dealer presentation in Drogenbos, Brussels. They received us in a special new section the Porsche Classic where their offer maintenance for their old cars. 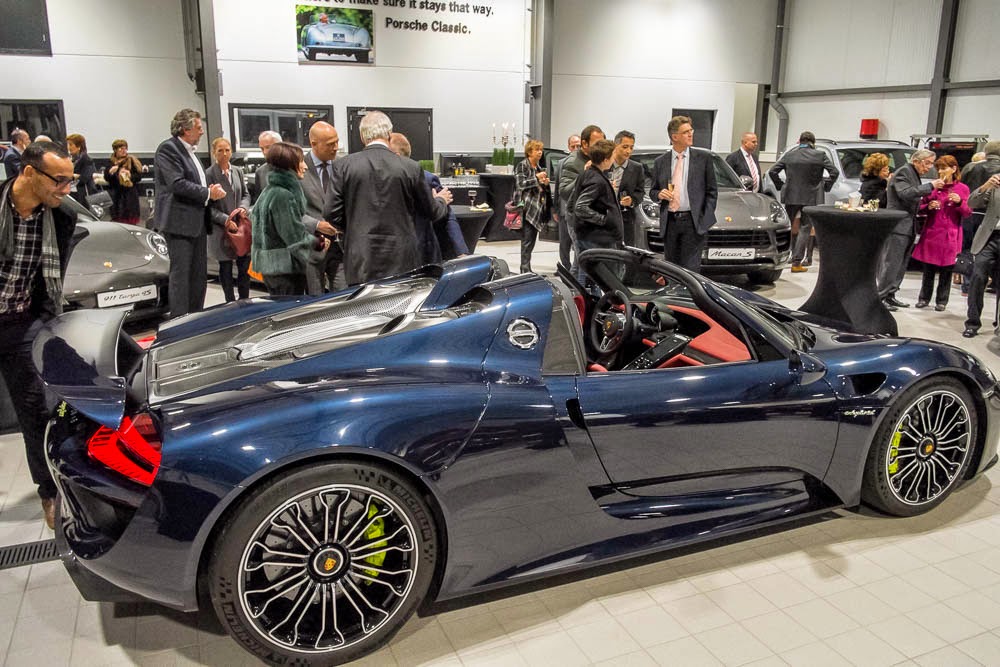 For more on tech details and videos visit the Porsche website, but if you don’t you have to witness the record-shattering lap of the new 918 Spyder  6 minutes 57 sec for 21km, on the famous Nordschleife ring in this video. https://www.youtube.com/watch?v=Bc9UUPNaOzE speed record broken.
To see the photographs of the event as usual click on the link above or below 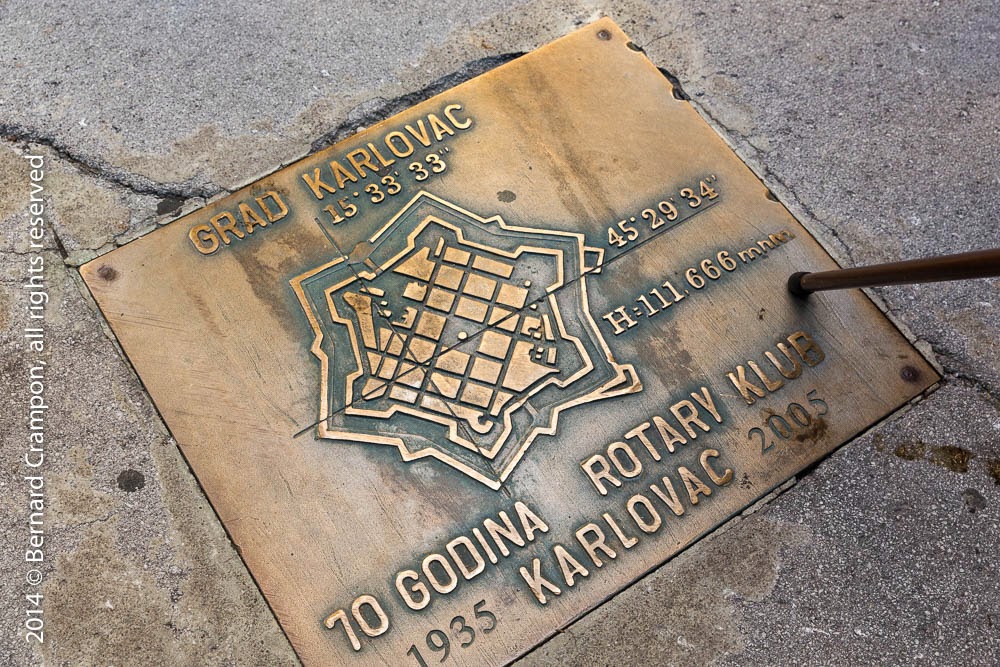 The Austrians built Karlovac from scratch in 1579 in order to strengthen their southern defenses against Ottoman encroaches.

Those photos are for the participants to the Italy trip, everyone is welcome to look at them.
Posted by Unknown at 8:49 PM No comments: 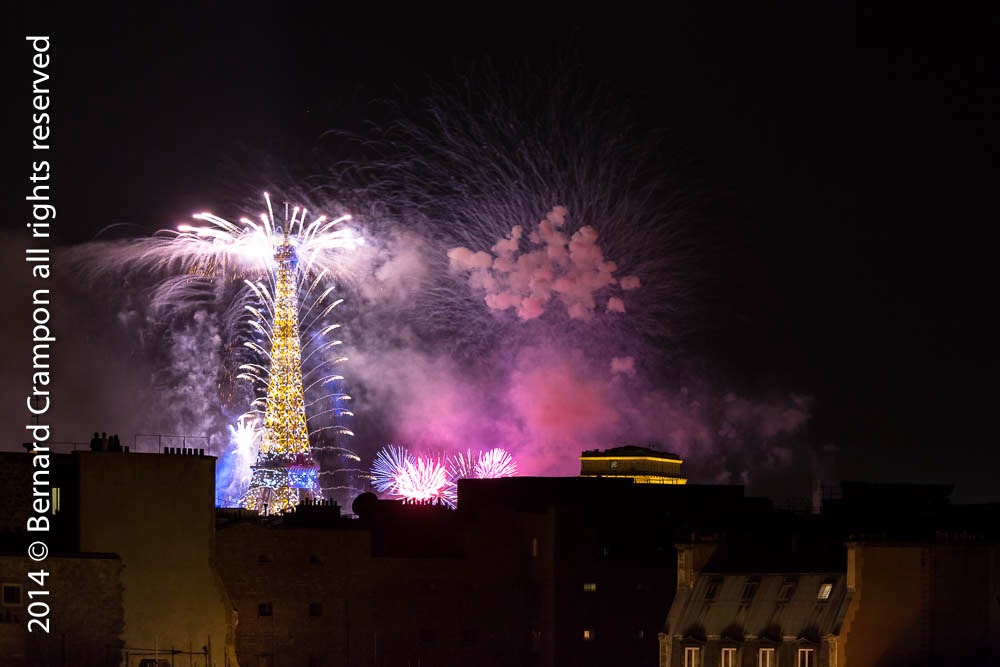 So finally comes the best part of the day, the FIREWORKS!
I must say that they were gorgeous. Enjoy

Lady Eiffel's tower dressed elegantly for the 14th of July 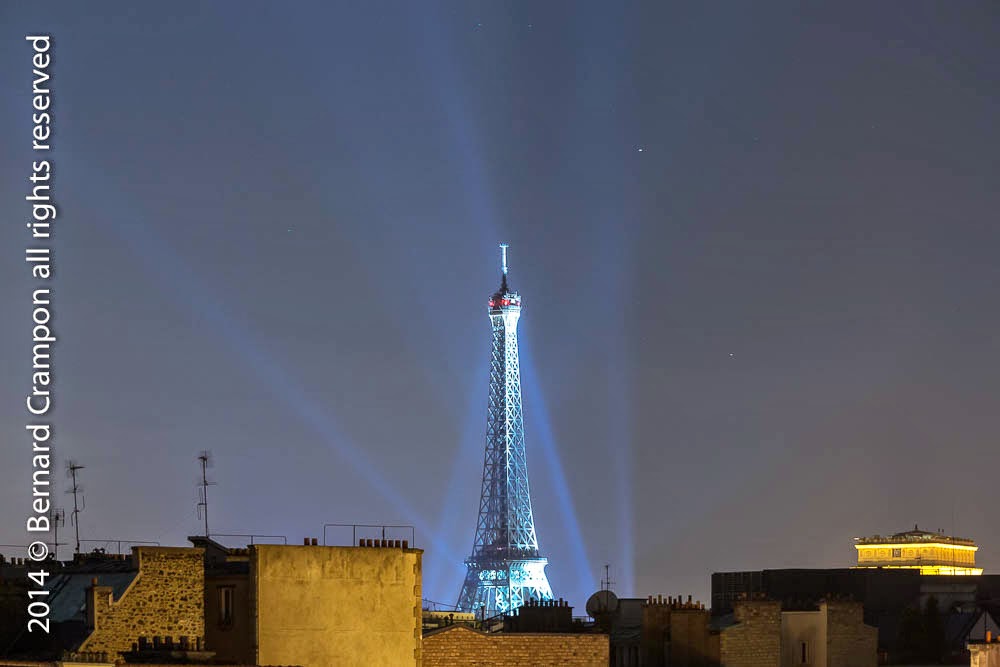 The 14th of July coming again, Lady Eiffel tower on July 13th decided to dress elegantly to show the world that she was still a modern grande dame. There goes few of those dresses. Enjoy 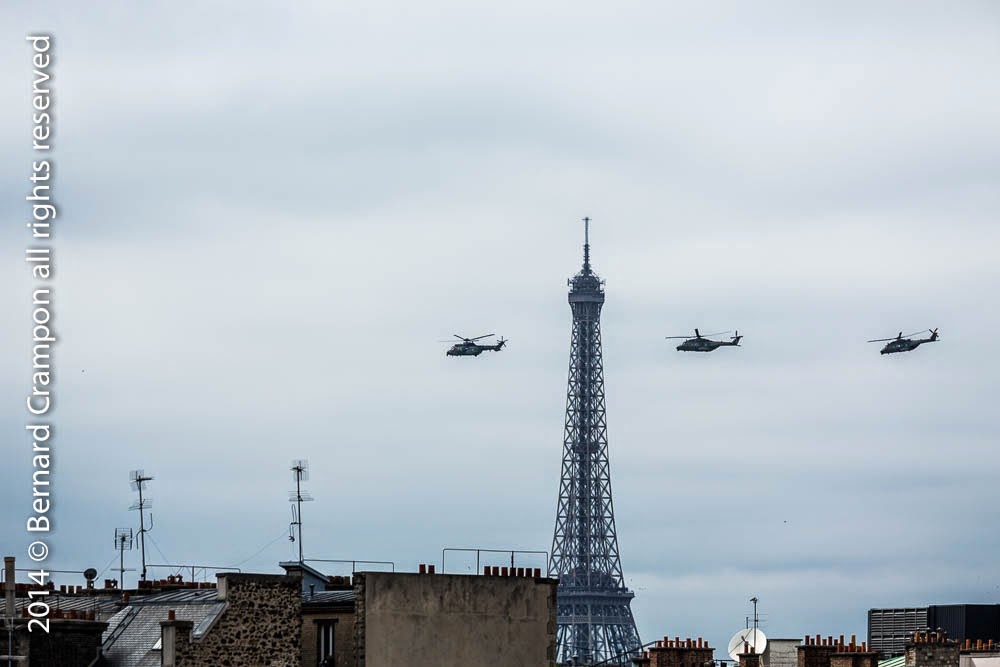 So comes the 14th of July celebration day! Going to the Champs Elysées where the crowd gather very early in the morning is not anymore for me. Hey! you see much better on TV and more comfortably. But luckily from our window's flat we can enjoy, life, the military aircraft parade; so again here goes few pics. Enjoy.
14th of July 1st part (link, enlace, lien)
Posted by Unknown at 12:00 AM No comments:

Atomium (link, enlace, lien)
The Atomium is a building in Brussels originally constructed for Expo '58, the 1958 Brussels World's Fair. Designed by the engineer André Waterkeyn and architects André and Jean Polak, it stands 102 m (335 ft) tall. Its nine 18 m (59 ft) diameter stainless steel clad spheres are connected so that the whole forms the shape of a unit cell of an iron crystal magnified 165 billion times! 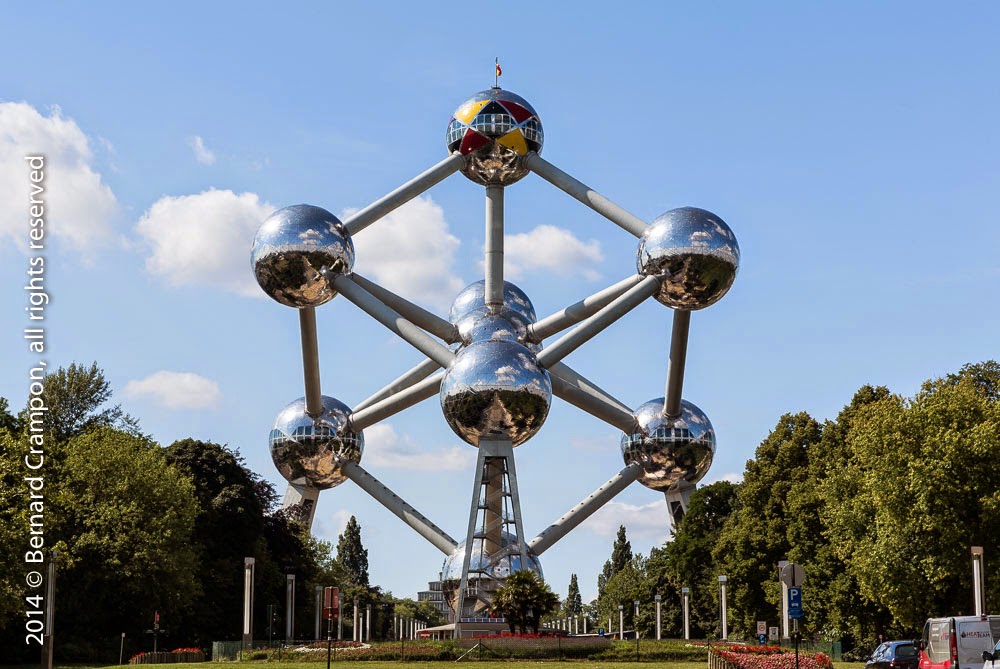 The Atomium renovation began in March 2004 and was finished in February 18, 2006. The renovations included replacing the faded aluminium sheets on the spheres with stainless steel. Three of the four uppermost spheres lack vertical support and hence are not open to the public for safety reasons, although the sphere at the pinnacle is open to the public. The original design called for no supports; the structure was simply to rest on the spheres.
Atomium (link, enlace, lien)
Posted by Unknown at 11:48 PM No comments:

Vitoria (enlace, link, lien)
If you ever go the basque country Vitoria-Gasteiz is a must stop either on your way to the Rioja region or back or on your way to Santiago de Compostela. Vitoria-Gasteiz is the capital city of the province of Álava and of the autonomous community of the Basque Country in northern Spain. Within the city Santa María Cathedral is the visit not to be missed. Santa María de Vitoria Cathedral was built by King Alfonso VIII of Castile after the conquest of Vitoria in the second half of the 12th century. Alfonso X was responsible for expanding and modifying the structure with Gothic details in the 13th century. 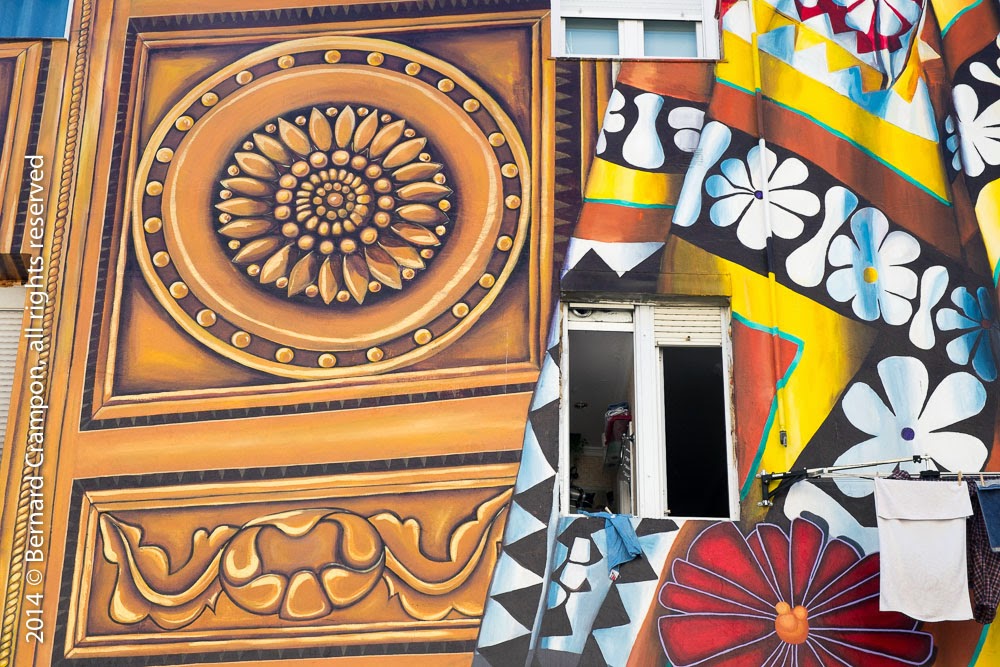 Due to a lack of funds and political unrest, the cathedral had been poorly maintained for years, and suffered from structural and conservation problems, including the destabilization of the foundation and walls, which had shifted over time. In 2002, a conservation master plan was developed and its implementation was carried out as funds became available by the Ayuntamiento (Municipality) of Vitoria-Gastéiz. The site Excavations during the restoration of the cathedral revealed layers of history dating back to the eighth century, including countless pottery fragments and almost 2,000 graves. The original settlement of Gasteiz was built around A.D. 800. In the eleventh century, the first city wall was erected and the first church was later built against it.
I could go on but this isn't the purpose of this blog.
Enjoy those snap shots taken along my visit.
(photos taken with my Fujitsu XE-1 18-55mm lens)
Vitoria (enlace, link, lien)
Posted by Unknown at 11:30 PM 1 comment:

The Royal Greenhouses of Laeken 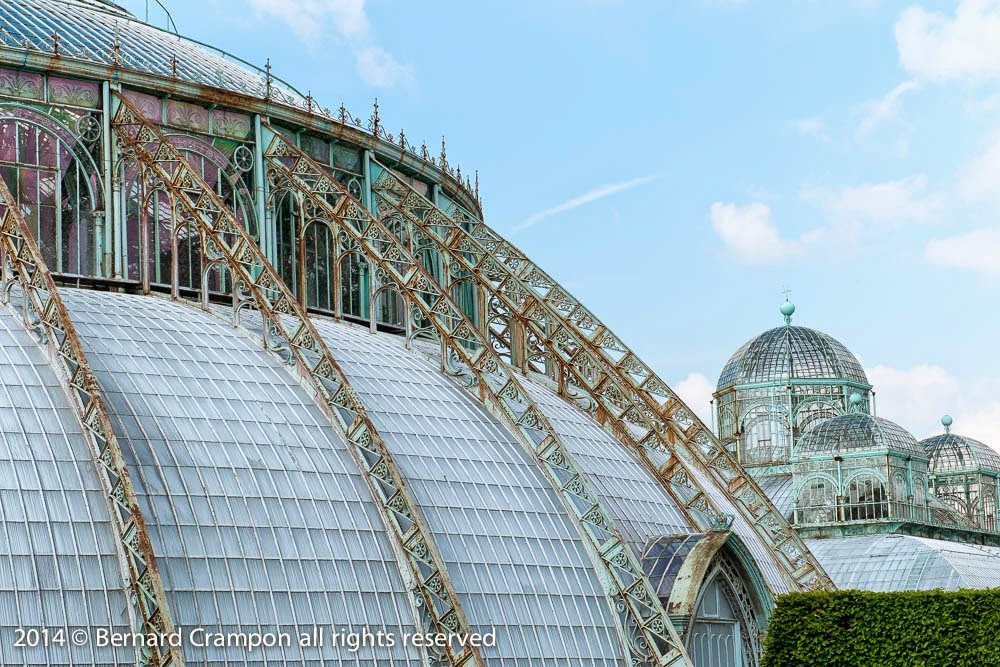 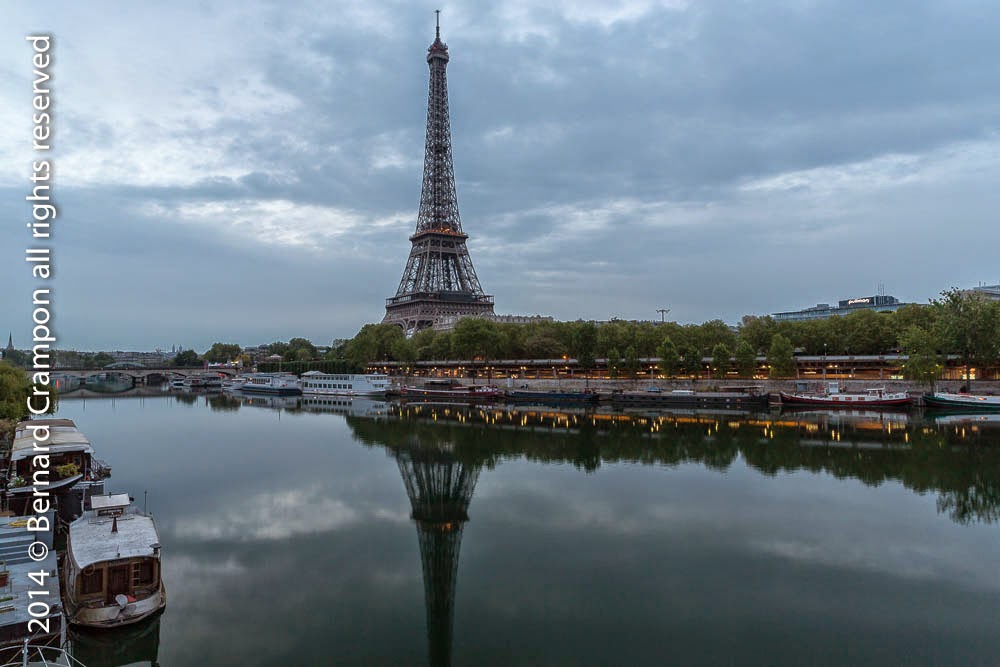 One more early morning. The first pic was taken at 6:20 am. To my surprise 3 other photographers had already their tripods set up and shooting. The sun was supposed to rise at 6:50 am, supposed because the horizon was very cloudy like the rest of the day has been. Anyway I enjoyed my early morning and I believe those few shots were worth it.
Enjoy.

Sunset at La Pyramide du Louvre (link, enlace, lien)
That day I wanted to check what would be in April a sunset on La cour du Louvre. Most of the day has been sunny and I thought that the weather would hold for the rest of the afternoon evening but it turned out not be cloudy.
I arrived a little too early thinking I could scout for original views and try to snap some shots. But man, it seems that half of the tourists visiting Paris come to visit le Louvre and then sit everywhere. Anyway, I had no other choice than to sit and wait, quietly watching all those tourists posing for the family picture in every pose there are able to think of. Then finally came the hour that they thought it was diner time, slowly we had less and less people but still … The sky was still very cloudy and it was getting cold. I was determined to take my chances up to the end. 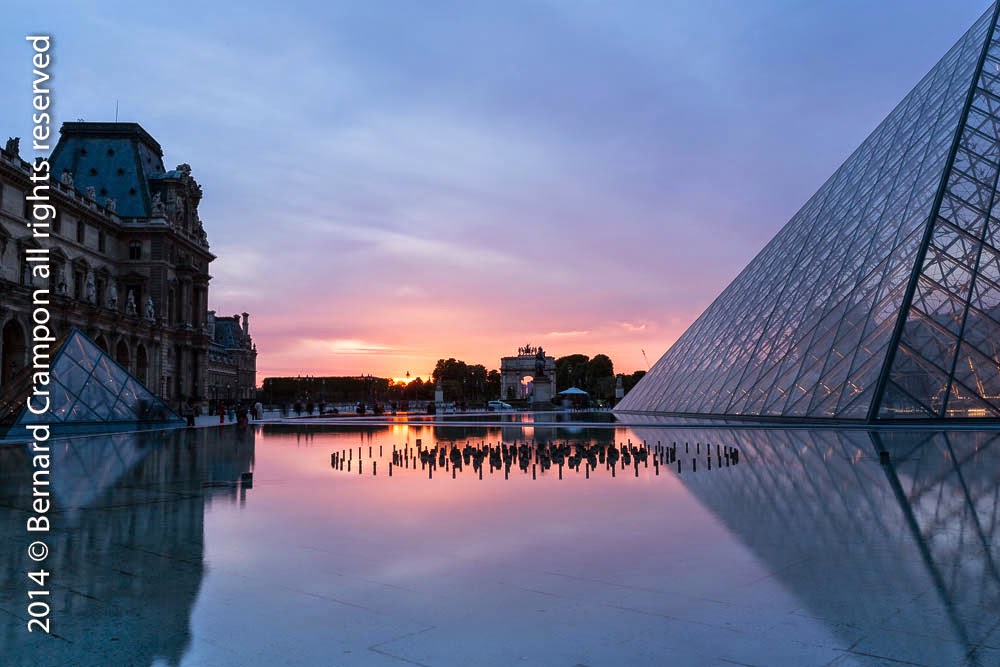 I believe I’ve been rewarded with at least 2 good photographs.To put you into the mood I’ve included few less interesting pictures :) . Last word: when it comes to sunset, be patient.
Enjoy
Sunset at La Pyramide du Louvre (link, enlace, lien)
Posted by Unknown at 10:44 PM 1 comment:

End of the afternoon, between Le Louvre and la Concorde 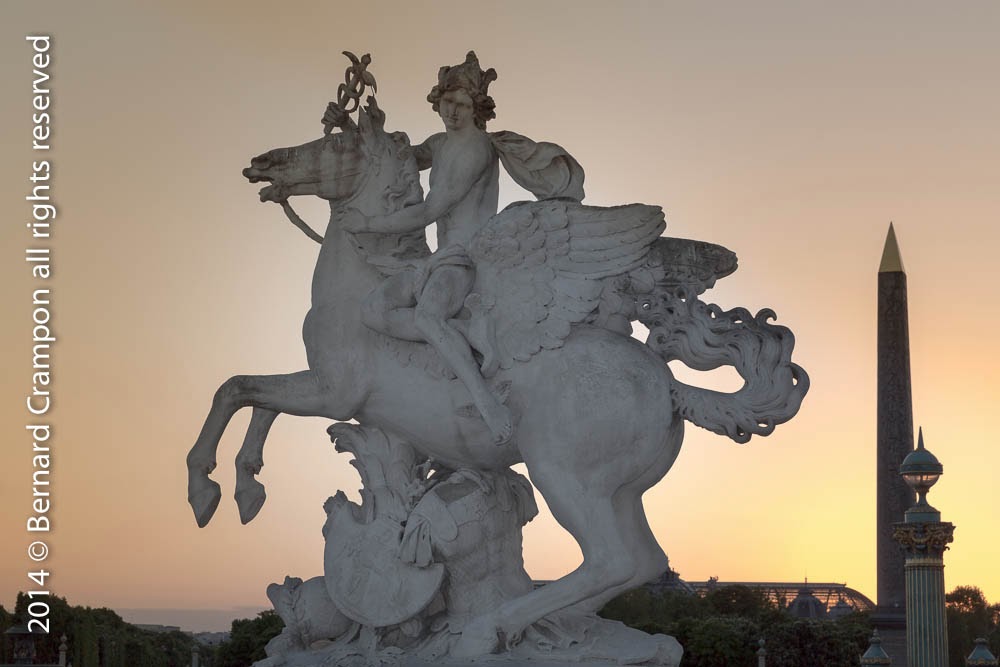 
between Le Louvre and la Concorde (link, enlace, lien)
Posted by Unknown at 11:17 PM No comments:

Hoping for a sunrise at La Butte Montmartre

Hoping for a sunrise at La Butte Montmartre (link, enlace, lien)
The night before I checked the weather forecast and decided it was worth getting up early. 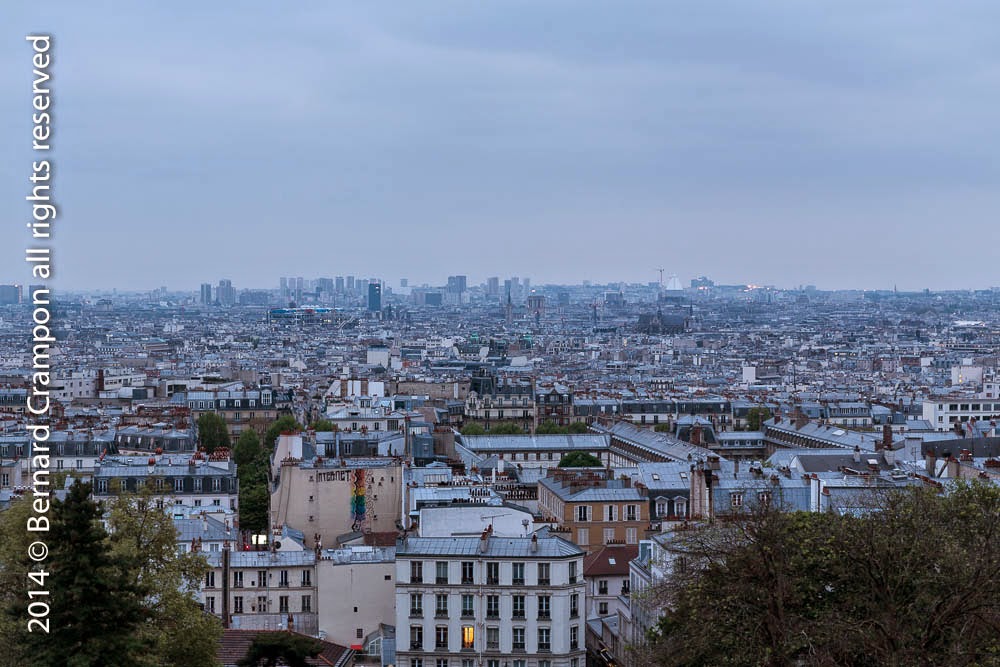 I arrived well on time and guess what! Although it was still night we clearly see a cloudy sky, see the first photo of the slide show. So no sunrise but some others photos of Montmartre Le Sacré Coeur.
Enjoy
Hoping for a sunrise at La Butte Montmartre (link, enlace, lien)
Posted by Unknown at 10:30 PM 1 comment: 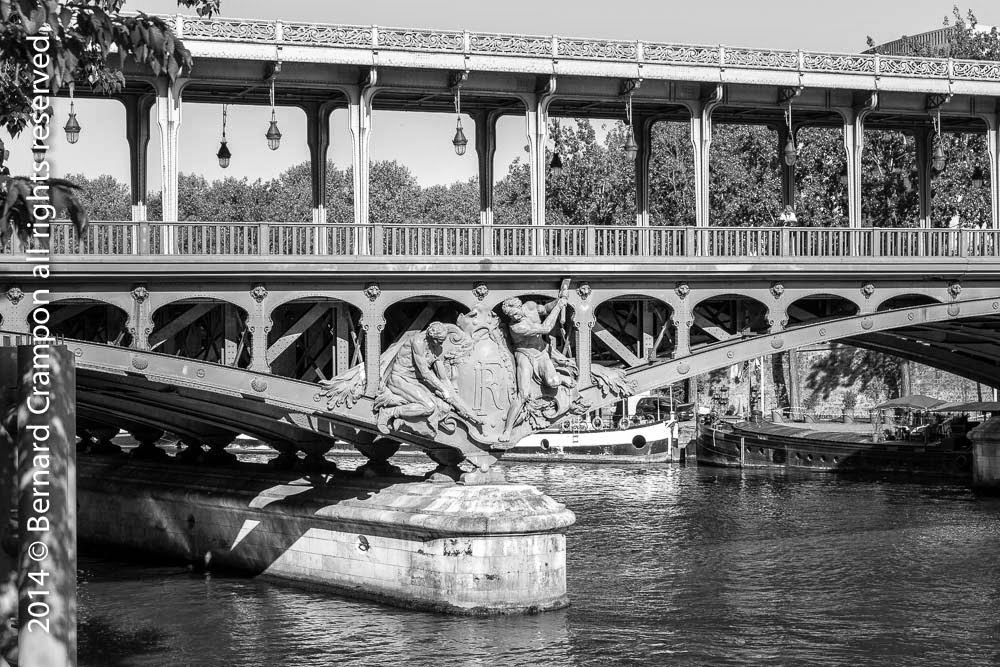 In the afternoon of this day I decided to explore the west part of the river Seine not known by tourists, more specifically the Île des Cygnes (Swan Ally Island), an island in the river Seine where you find a replica of the Statue of Liberty ,11.50 m (37 feet 9 inches) high. This exact Statue of Liberty replica monument was offered to the French by the American residents of Paris as a remembrance to commemorate the Centennial of the French Revolution. It was inaugurated on November 15, 1889.
Enjoy
West part of the river Seine (link, enlace, lien)
Posted by Unknown at 10:34 PM No comments:

Sunrise over Paris from the Trocadero

Sunrise from the Trocadero (link, enlace, lien)
I'm not the kind of man that gets up very early, that’s why you haven’t seen many sunrises in my photography so far. Weather was good, not too cold, early morning was forecast to be cloudless, so Hop on my way to the Trocadero, hoping for a nice sunrise. Anyway enjoy theses few pics taken from 7 am to 8 am. 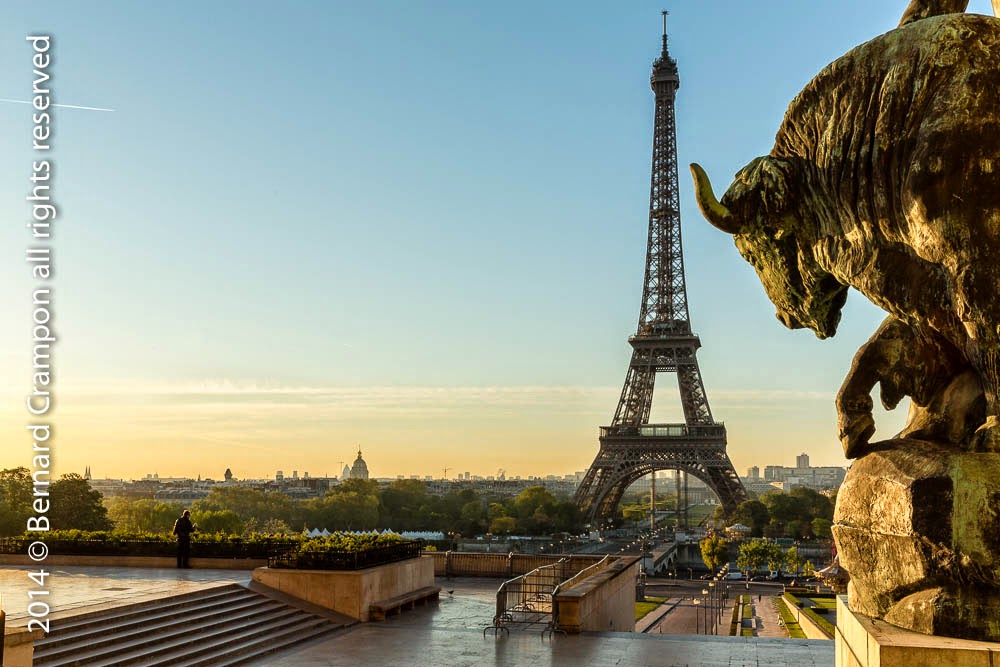 Sunrise from the Trocadero (link, enlace, lien)
Posted by Unknown at 10:27 PM 1 comment: 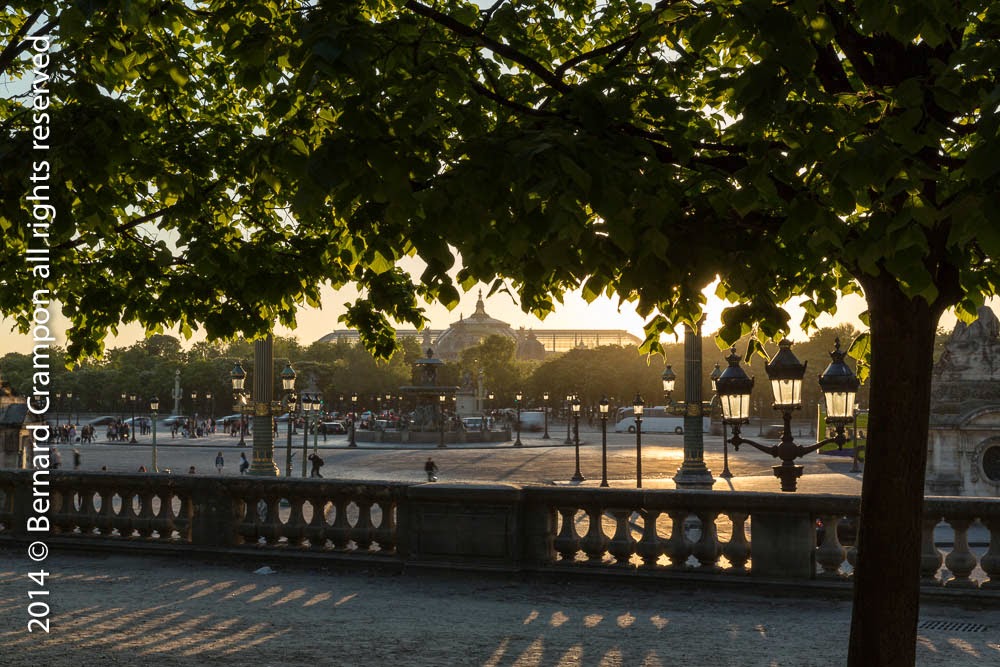 Paris, along the river Seine

along the river Seine (link, enlace, lien)
The week of 15 to 21 I had a really good time photographing Paris again ,my favourite playground. :)
The weather has been a mix of sun and cloudy skies with temperature around 12 early morning up to 20 celsius for the best day. Some mornings I have been rewarded with a nice sunrise other well not, but even I can tell you, being alone in Paris streets, well almost since you get the street cleaners, the delivery vans, the joggers, etc.  in your way, but compare to hordes of tourists it’s nothing really.
So I’m going to share those mornings, evenings experience
The first day will be along the Seine river. 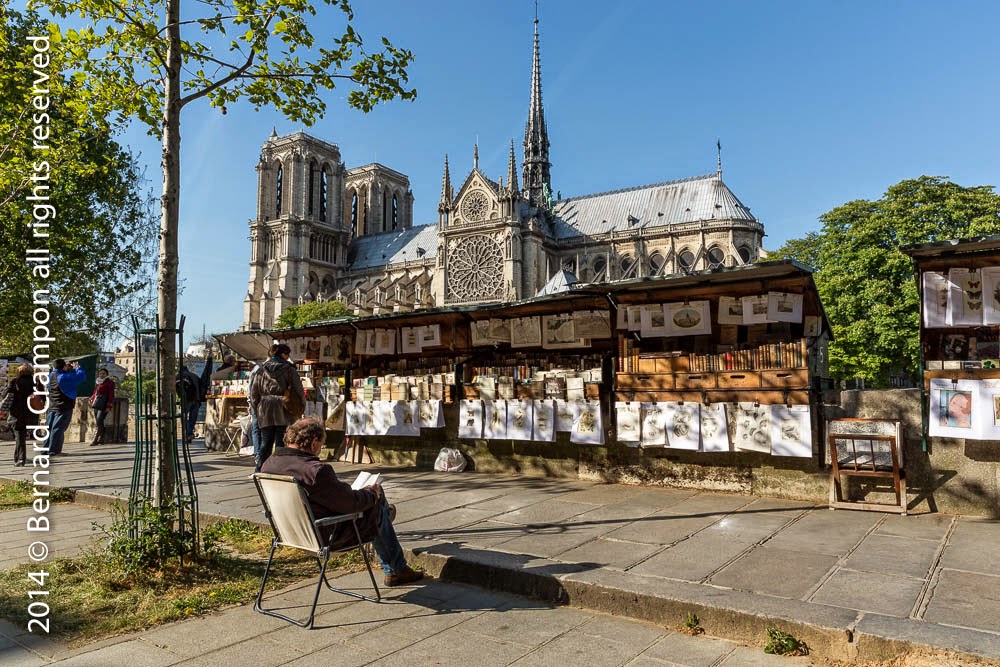 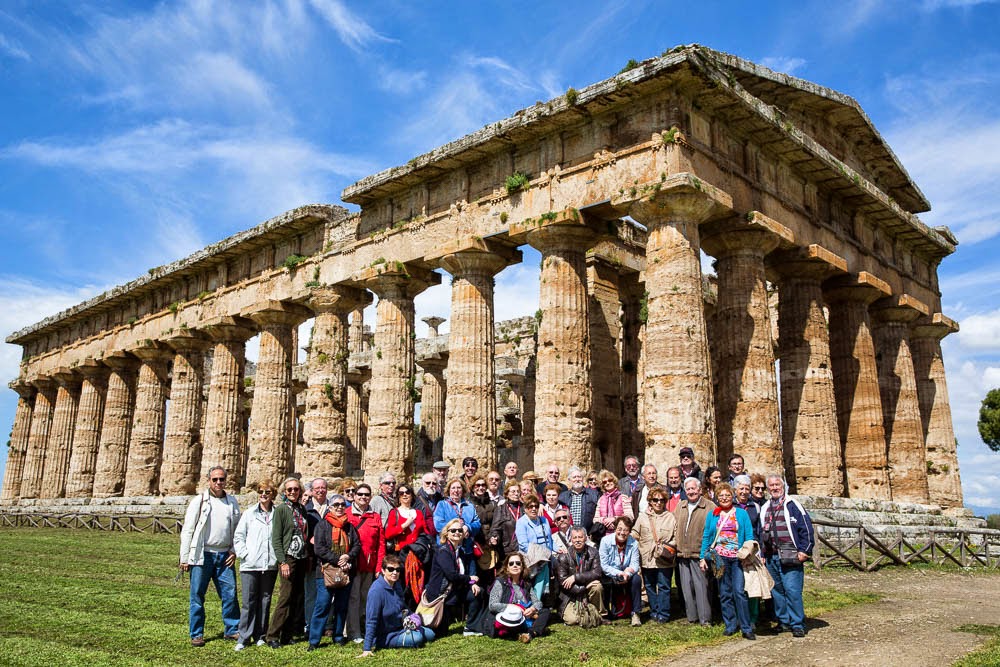