I’m going to release pictures of the corrida of May 16 2010 very soon. Before I’d like to introduce what a corrida is.

Spanish-style bullfighting is called corrida de toros (literally "running of bulls") or la fiesta ("the festival"). In the traditional corrida, three matadores, each fight two bulls, each of which is between four and six years old and weighs no less than 460 kg (1,014 lb) Each matador has six assistants—two picadores ("lancers on horseback") mounted on horseback, three bandilleros – who along with the matadors are collectively known as toreros ("bullfighters") – and a mozo de espadas ("sword page"). Collectively they comprise a cuadrilla ("entourage"). In Spanish the more general torero is used for the lead fighter, and only when needed to distinguish a man is the full title matador de toros used; in English, "matador" is generally used for the bullfighter.

Next, the bull is released into the ring, 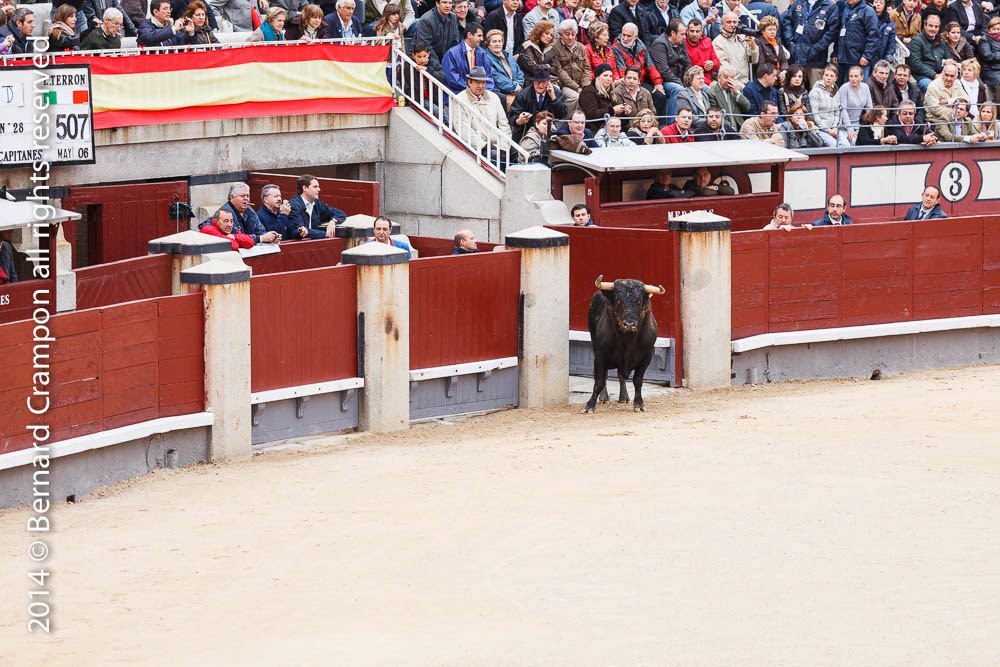 where he is tested for ferocity by the matador and banderilleros with the magenta and gold capote ("cape"). This is the first stage, the tercio de varas ("the lancing third").

The matador confronts the bull with the capote, performing a series of passes and observing the behaviour and quirks of the bull. 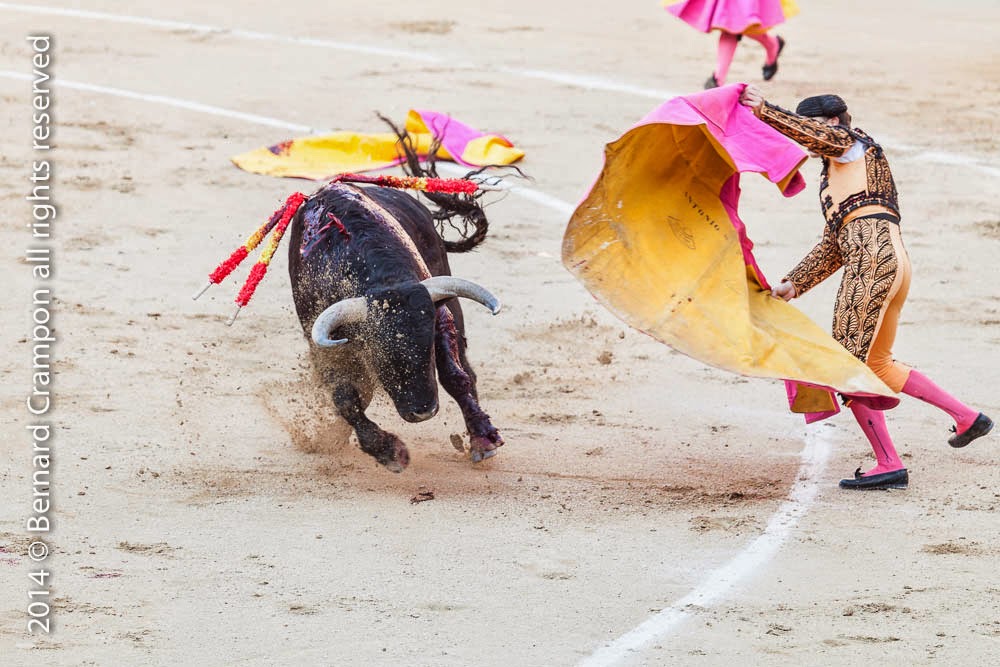 Then intervention of The picador who has three main functions:

1. To pierce the muscle on the back of the bull’s neck in order to straighten the bull's charge.

2. To fatigue the bull’s neck muscles and general stamina as it tries to lift the horse with its head. 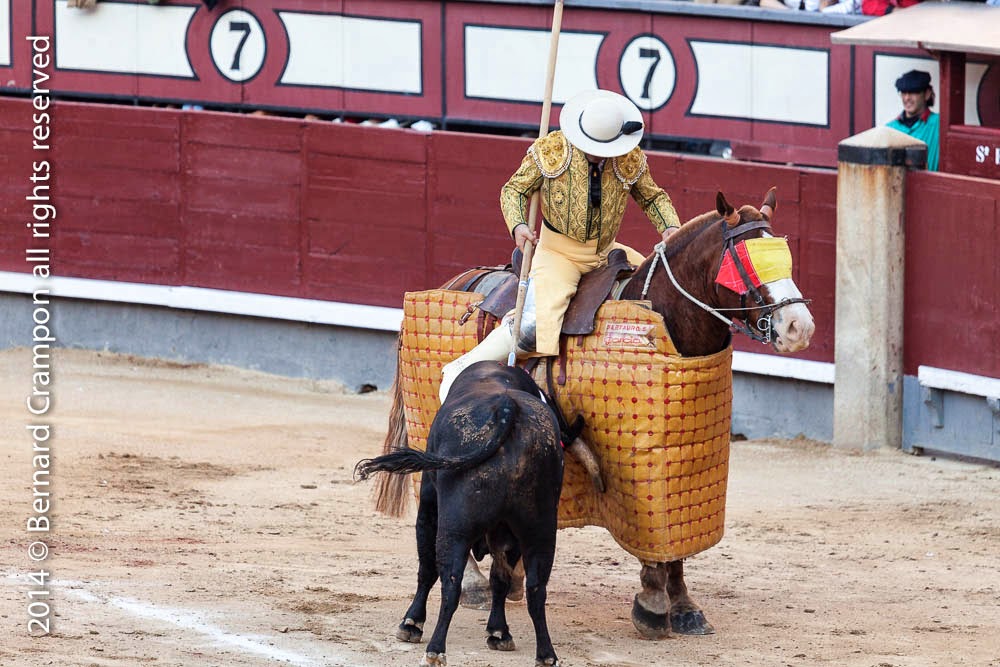 3. To lower the bull’s head in preparation for the next stage.

The manner in which the bull charges the horse provides important clues to the matador about which side the bull favours. If the picador is successful, the bull will hold its head and horns slightly lower during the following stages of the fight. This ultimately enables the matador to perform the killing thrust later in the performance.

In the following stage, the tercio de banderillas ("the third of banderillas"), each of the three banderilleros attempts to plant two banderillas, sharp barbed sticks, into the bull's shoulders. Sometimes a matador will place his own banderillas. If so, he usually embellishes this part of his performance and employs more varied manoeuvres than the standard al cuarteo method commonly used by banderilleros. 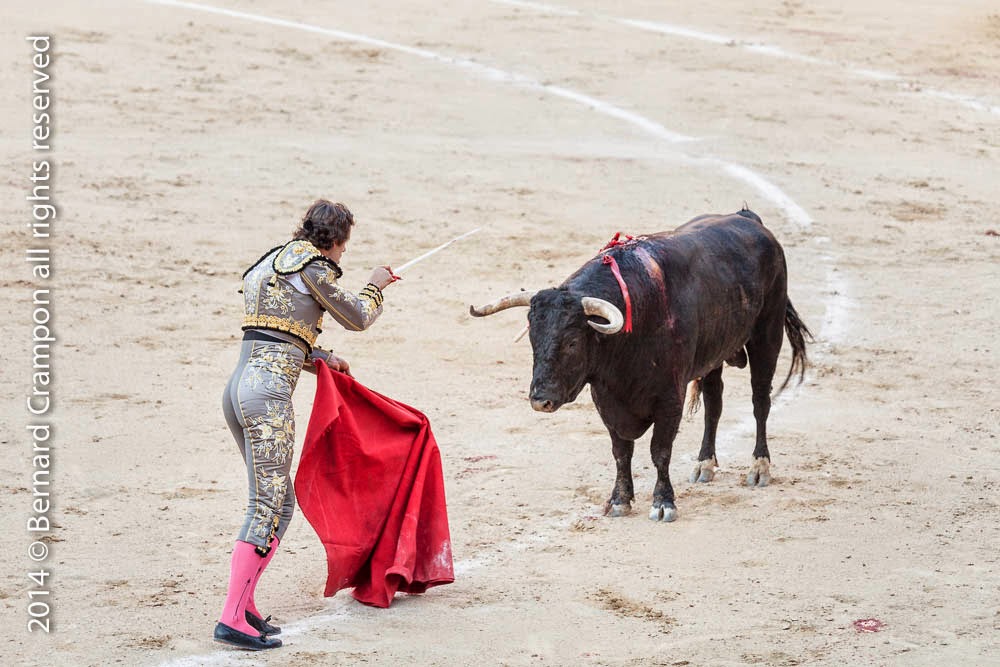 Finally, the tercio de muerte ("the third of death"), the matador re-enters the ring alone with a small red cape, or muleta, and a sword.The cape is thought to be red to mask the bull's blood, although the color is now a matter of tradition. The matador uses his cape to attract the bull in a series of passes, which serve the dual purpose of wearing the animal down for the kill and creating a beautiful display, or faena. He may also demonstrate his domination of the bull by caping and bringing it especially close to his body. The faena refers to the entire performance with the cape (muleta).

If the matador has performed particularly well, the crowd may petition the president by waving white handkerchiefs to award the matador an ear of the bull. If his performance was exceptional, the president will award two ears. In certain more rural rings, the practice includes award of the bull's tail. Very rarely, if the public or the matador believe that the bull has fought extremely bravely, the event's president may be petitioned to grant the bull a pardon (indulto). If the indulto is granted, the bull's life is spared; it leaves the ring alive and is returned to its home ranch. There the bull becomes a stud for the rest of his life.
Posted by Unknown at 11:30 PM 1 comment:

In the month of May Madrid celebrates the fiestas in honour of San Isidro, the city’s patron saint.
Bullfights play an important role in these celebrations, with a top-level line-up and a fair that lasts some two weeks, with normal bullfights and “rejoneo” (horseback bullfights). Furthermore, the Spanish capital’s most traditional streets come alive with concerts, performances, competitions, street entertainment and open-air parties. On 15 May, the feast of San Isidro itself, there is a procession/pilgrimage and a public lunch. 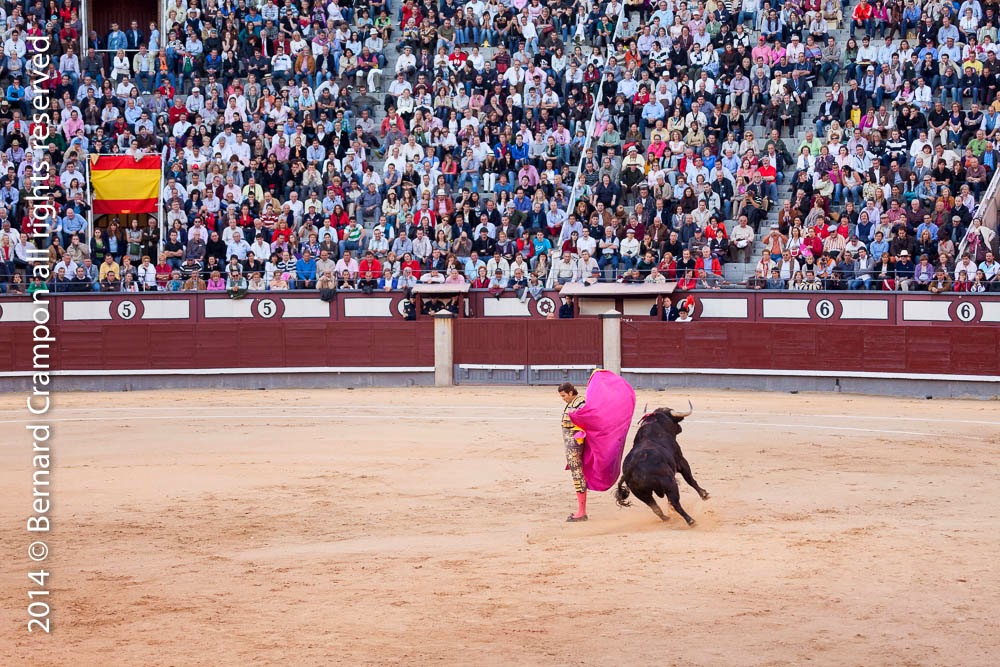 The bullring of Las Ventas, Madrid is considered as the temple of bullfighting. It is every toreo dreams to get in. Succeeding in, for those men who wear the Light Suit, is the highest reward since the difficulty is proportional of the challenge. Don’t forget, in Las Ventas, everything is magnified, triumphs and failures.
Today I'm showing you pictures of corridas taken in May 2010
Corrida Plaza de las Ventas (link, enlace, lien)
Posted by Unknown at 2:43 PM No comments: