Just arrived tonight in Athens.
view from our hotel. 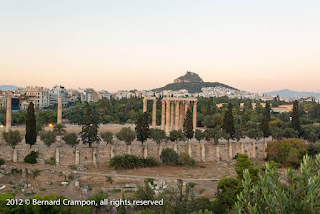 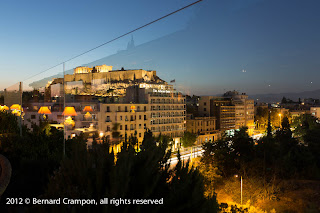 Posted by Unknown at 8:56 PM No comments:

Bernard's Travels: Saint-Malo Walled city: From the Walls of Saint-Malo Saint-Malo the famous granite city, is a walled port city in Brittany in northwestern France on the Englis...
Posted by Unknown at 5:07 PM No comments:

Visit at the Mont Saint-Michel


We left Paris with a weather forecast that was assuring us of sunny sky. Well weather.com was not accurate at all. We visited the Mont Saint-Michel under a grey sky unfortunately.

Mont Saint-Michel is a rocky tidal island and a commune in Normandy, France. It is located approximately one kilometre off the country's north-western coast, at the mouth of the Couesnon River near Avranches. The population of the island is 44. The island has held strategic fortifications since ancient times, and since the 8th century AD been the seat of the monastery from which it draws its name. The Mont-Saint-Michel and its bay are part of the UNESCO list of World Heritage Sites. More than 3,000,000 people visit it each year.

Tidal island Mont Saint-Michel was previously connected to the mainland via a tidal causeway. This connection has been altered over the centuries. In 1879, the tidal causeway was converted into a raised or dry causeway. This prevented the tide from scouring the silt around the mount.
On 16 June 2006, the French prime minister and regional authorities announced a €164 million project to build a hydraulic dam using the waters of the river Couesnon and of tides to help remove the accumulated silt deposited by the rising tides, and to make Mont-Saint-Michel an island again. It was projected to be completed by 2015.
The construction of the dam began in 2009 and is now complete. The project also included the removal of the causeway and its visitors car-park. It will be replaced by a light bridge, allowing the waters to flow freely around the island, which will improve the efficiency of the now operational dam.
Bonne visite.
Posted by Unknown at 9:48 AM No comments:

Along the river click on the link
Posted by Unknown at 11:26 AM No comments:

Flame of Liberty and Death of Diana, Princess of Wales 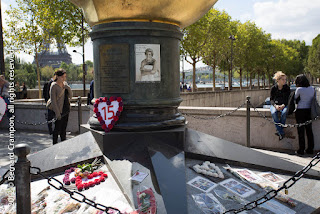 Yesterday Friday 31st of August was the 15th anniversary of the tragic accident of Lady Diana. Believe it or not Flame of Liberty was still full of people coming from everywhere to remember her memory.
Posted by Unknown at 10:07 AM No comments: